This sports bra is especially designed for women with C-F cup. Inner side wings with smooth fabric adds a lot comfort while mesh inserts strategically offer better ventilation. Underwire support with great full coverage and support, it would be your best workout companion.

We want you to be completely happy with your  purchase. You have 30 days  to make sure it is perfect. If something’s not right, we can help. Our Fit Experts are available via email to answer any questions you might have. Our Returns & Exchanges makes it easy for you to locate your order and easily swap out the size and/or style. Not applicable on Try Before You Buy orders.

After losing 200 lbs, my breasts are empty windsocks and like trying to contain/shape water, lol!!

That makes it difficult to find bras within my price range due to fixed income.

This bra supports, keeps the girls on their own side and shapes wonderfully.

K
Kimi Rose
Update: not so much...Just what I've been looking for!

I gotta say, I've been trying for years to find a bra that has both sports bra comfort and underwire support. I am a 61 year old woman with 38DD's that aren't saggy exactly but they could use extra lift. I'm SO EXCITED, this bra has both. The cup size runs a tiny bit large, and the size around the chest runs a size small, but it still works perfectly fine for me. Even looks ok under a thin tee-shirt. The one drawback is the sides could provide a little more coverage, but the support, comfort, and even the straps are wide so they don't dig into your shoulders. I love this bra! I hope it will be just as (or more!) comfortable after I've washed it.

Updated: I previously bought a 38DD, which I returned, because the cups were way too big (i usually wear a 38DD and usually no problem). It was a little tight around the chest, too, so I decided to try a little bigger around (40) and smaller cups (D). Received the replacement yesterday. It's too big around, and the cups look exactly the same. Plus the cups don't lay smoothly. I'm going to have to return this one too. Disappointed, because I've been looking for a combination sports bra with underwire lift that doesn't irritate during the day.

I’m 34C and after reading the reviews about the tight bands, I went up 2 sizes for 38c which is way too big. I reordered the 36c and it fits. I agree the band is tight but I like that for workout bra so it restricts movements n bounce. It holds the girls up nicely as you can see. Minus 1 star for the wrinkle padding but not a priority for workout. Does have underwire but comfortable. Ship fast and easy return. Will get another color now that I found my size.

I have tried multiple Syrokan bras on my search to replace my favorite playtex underwire sports bra that I cant find anywhere anymore. One thing I've learned about this brand is always go up a band size. I usually wear 38C, but in this brand I always buy 40C. In my reviews I've been listing the product fit as "too small" because if I ordered my actual size it would be.
The first thing I noticed about this particular style is that the straps, even on the last loop, are almost too short. I'm 5'8. I think on the last loop itd fit fine if there was some of that good pliable/durable sports bra stretch to the straps, but sadly there is no stretch to them to pull down the back. The fact that this bra has the option to go 7 loops tighter tells me this must have been designed for a shorter framed person. Construction wise, while the material of the band that runs from the sides to the back & up connecting to the back of the straps is stretchy, all the other material of this bra including the adjustable straps & molded cups is very stiff. So stiff in fact, that it makes a squeek noise as it rubs against the underwire inside. Squeek squeek squeek w every movement. I feel like it may even be distracting to work out in. Still, there are likable points about it on. The molded cups/ stiffness of the material has a plus side in that it completely covers/conceals, holds snugly & gives a decent shape, although for my frame, my boobs are caused to sit unusually high. Overall it was not a right fit for me, but if you have a shorter frame, at $20, Id say its worth a try.
I took a picture of the inside cups to give you an idea of the texture & thickness of the molded cup material. 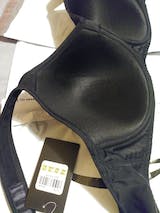 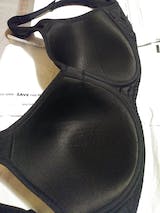 T
T
Order your size unless you're vanity ordering.

This is a stable bra. The sizing I ordered, 34F, was perfect for me. I don't know why anyone would tell you to order a different size. It's a good bra with good lift and no uniboob. It reminds me of my Tisha Dream bras at 1/3 of the price. I'll review this again in 6 months. Well, I ordered a 34DDD Wacoal bra and received it today. It looks like these two bras were made at the same factory, even though one is inexpensive and the other is not. The Wacoal is about a half inch tighter in the band and the cups are a bit smaller-all of which was expected. The way to tell them apart is the Wacoal still has the tag on it. There is no way I'd buy the more expensive bra since they're so very similar.