These non padded bras give all-round support and uplift with underwire and full coverage cups.Front-closure design eliminates uncomfortable metal hooks and is very easy to wear off.The wide straps and racer back for added comfort.This bra is designed to give good support and a flattering fit for essential everyday comfort.

We want you to be completely happy with your  purchase. You have 30 days  to make sure it is perfect. If something’s not right, we can help. Our Fit Experts are available via email to answer any questions you might have. Our Returns & Exchanges makes it easy for you to locate your order and easily swap out the size and/or style. Not applicable on Try Before You Buy orders.

I ordered 4 of these Bali bras because my previous Bali bras now swallow me now since losing 45 pounds a year ago. I was about to give up getting anything to fit till these beautiful, well-made bras arrived today. I tried the first 3 bras on and I was so impressed with the fit and the back smoothing feature. The clasp is a breeze to fasten. The straps, fully extended, worked great for my particular anatomy. The three bras I tried on first that fit all had the same combination of tags, including a green shoulder strap tab indicating the size. The fourth bra, however, had a standard retail tag on the bra with no additional badges or labels nor a size tab on the shoulder. I tried on the 4th bra and it cut into me the minute I finally managed to fasten it in the front. No matter what I did, the bra remained painful and uncomfortable and I now showed bra bulge under the arms and at the flanks of my back. I figured the bra was sized wrong because I could pick it out with my eyes shut if they were shuffled up and handed to me in no special order. I examined the stamping in the back inside of the bra and there were more differences. The bra seems to be assembled somewhat differently from the other bras that fit so nicely. Under the arms, the material almost looks gathered like a skirt and the gentle “U” at the middle of the back strap is much narrower on the tighter bra. I was planning on order another 4 bras, but I only want bras with the same tags and identifiers as the three bras that fit. I plan to contact the seller to make an adjustment, replacement, or refund prior to making any new order. If I get more of the odd bra that cuts into me, I will return them. Other than having one bra “cut too small” of the group of 4, I could not be happier. The one bra that does not fit correctly is in the photo with the single green and white tag and the last number inside the bra reads 02188A. The three bras that fit perfectly have multiple black tags and a green shoulder strap size tab has the last number inside the bra as 04188A. 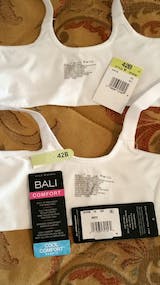 I constantly have problems with my bra straps sliding off my shoulders. This racer back front closure bra fits the bill perfectly! The straps don’t slide and it fits perfectly and it is very lightweight and comfortable.

So far have not been delivered, please track package.
Patricia Bradley

Very comfortable and easy to put on. I work 12 hour shifts, and I dont have to pull at or adjust. Only had for a month so cant comment on durability yet.